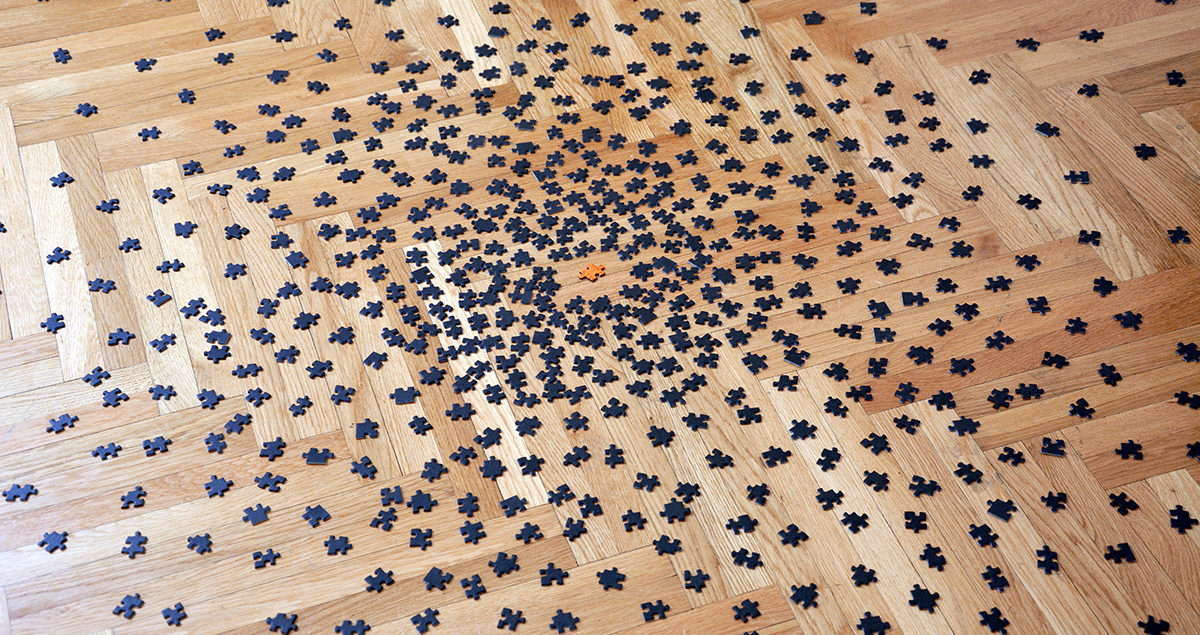 At his exhibition “Moment Now” in Cultural Centre “House of King Peter I”, artist Bogdan Pavlović has presented the overview of his four-year-long artistic production.

The display itself is conceived in harmony with space. Since Pavlović uses various visual media of expression, this exhibition has been designed as 8 or nine mini exhibitions, whereas each room of “House of King Peter I” corresponds to one thematic or artwork whole.

Pavlović’s artistic production from 2011 to 2014 includes drawings (ink on paper), oil on canvas and paper, acrylics on carpeting and photos. The artist treats similar and sometimes same subjects through various media. Scenes and atmosphere of everyday life are the thematic thread of displayed works. The artist uses photographs as the starting point for pictures and drawings, but also as an independent medium.

Although created on the basis of photographic templates, pictures and works on paper are not subject to one of the basic photography strategies, the “freezing” of reality or moment. Thanks to their expression, Pavlović’s works are in constant motion and pulsations.

Accordingly, the most explicit examples are pictures made in red acrylic on black carpeting. Like classic photos created in dimmed red laboratory light and with the aid of the solvent, the forms in Pavlović’s pictures emerge from darkness at the moment we are watching them.

The touch of color on the raw carpeting background creates original pictorial effects introducing new parameters of reading a contemporary picture while distancing these works from traditional painting.

Technologically speaking, Pavlović’s experimental approach is also reflected in the works done in oil paint (on paper or canvas), where the frequent use of silver or metallic-silver color is present with the aim of finding new plastic qualities.

Motion is a feature permeating all the exhibited works. Just like in performance and contemporary theatre, it represents the sublimate of our aspirations, emotions and states of mind.

In the picture from “Asian Melancholy” series we can see two young Asian women in an ambivalent relationship of hugging and wrestling. Their hair is entangled, intertwined and combined into the black ink leaking outside the picture frame and continuing its way down the wall of the studio or exhibition space. In that manner painting templates reality merges with life reality of the physical world.

No matter whether used as a fairytale character or a symbol of military emblems, the wolf has always fascinated man, while man himself has identified with this animal both at symbolic and psychological levels as well as at the magical level in ancient times. In his series of works on paper “Winter Wolves” Bogdan Pavlović actually speaks about human nature: about man’s wild character, his attitude to hostile environment, his loneliness, uncertain destiny, his weaknesses, his strength and perseverance. Based on photographs taken in a zoo park, these works in a certain sense remind us of “Steppenwolf”, the masterpiece of famous German writer Hermann Hesse.

One of the rooms is dedicated to the selection of works from earlier multimedia project “Playtime”. The video work, drawings, photos and pictures on carpeting depicting the play of the custodian and the dog in the gallery space (Gagosian Gallery) turns this accidentally recorded event into ritual play of two protagonists.

Visitors of various art exhibitions are the reason for creating the homonymous photograph series. In this case motion is dominant too, but this time it points to man’s relationship to artwork while an interesting reversal of meaning takes place: the spectator is being watched – the beholder of art becomes the subject of the photo.

The art reality Pavlović deals with is directly connected to his life and visual experiences and unfolds in front of us while we are watching his works.

Marilane Borges: Could you please tell us something about your creations and your artistic adventure?

Bogdan Pavlović: Just like most boys in my generation, I grew up on the culture of comics. There was a really special strip that influenced my growing up. It was Hugo Pratt’s Corto Maltese. My daydream was to become a comics artist or illustrator one day.

M.B.: How long have you been working as an artist and how did it all begin?

B.P.: I began dealing with painting rather late, at the age of 24, during my studies at Ecole des Beaux Arts in Paris, ENSBA. I soon realized that a huge source of inspiration lay in the visual experience from my childhood. By narrative fictional procedure and pictures filled with geographic maps, airplanes, great explorers’ adventures, animals and miraculous travels I wanted to address some of those important modern world issues: ecological problems, political and economic polarization etc.

M.B.: What are the ideas guiding you when you start painting?

M.B.: Can you clarify the process of your work and creation of your compositions?

B.P.: Since photography represents a medium closest to reality, it served me as the starting point for my painting research. In the beginning I used some historical photographs and then the neutral ones from internet. Today I use photographs I take myself as subjects for pictures.

M.B.: How did you come to the idea to work with different kinds of surfaces?

B.P.: Apart from the notional, conceptual aspect and reducing color scale to more simple and minimalistic relations, my painting has had a turning point at the technological level too. That was my discovery of a new material, this soft covering/felt cloth. It is well known that artists such as Joseph Beuys and Robert Morris used similar materials for their three-dimensional creations-installations but I don’t know whether artists have ever used floor covering as a painting surface, at least not systematically.

M.B.: Where does your fascination with this material come from?

B.B.: The paintings from an exhibition staged several years ago were returned to me wrapped in a sort of covering/felt cloth. This cloth itself attracted my attention by its features such as raw structure, dry and absorbing texture of its surface… A chance contact with a new material has resulted in a new artistic adventure. The painting process is radically different from the classic approach because in this case unpainted felt surfaces play an equally important role as painted surfaces in the process of building up a picture. Therefore, this kind of works goes out of the cliché of what we understand as a classic picture. On the other hand, there is the impression that such works are being created before our eyes while we look at them and that the spectator’s role is to finish the work of art at the mental level.

M.B.: What is your attitude to contemporary art?

B.P.: We live in the world of images. Everything can serve as an inspiration for creating new works and ideas. I think that an artist’s role is to modify, change and invent the world of images by focusing on what is of essential significance to him personally.

M.B.: How do you choose subjects for your pictures?

B.P.: In order to create, we can start from very simple things: one color, one emotion, a single flash of light in a photograph or in reality. Then there is the body motion, atmosphere of an object or space and its psychological and visual character. The choice of subjects can be intuitive or rational. In my case it is both at the same time; it is something that cannot be divided.

M.B.: What are your future projects?

M.B.: What is your inspiration in everyday life?

B.P.: It is the impression of unique existence in the present, constant changes and motion.

M.B.: What is art in your opinion?

B.P.: In my opinion, art is directly connected to play. Art begins and finishes in the act of creation. Moreover, a work of art as its product constitutes a completely different reality, the one that is material, physical and ultimately does no longer belong to the artist.

M.B. : If you could have three wishes in relation to your art and creations, what would they be?

B.P. : I have no specific wishes in relation to my art but only to the people who really exist and those I care about.