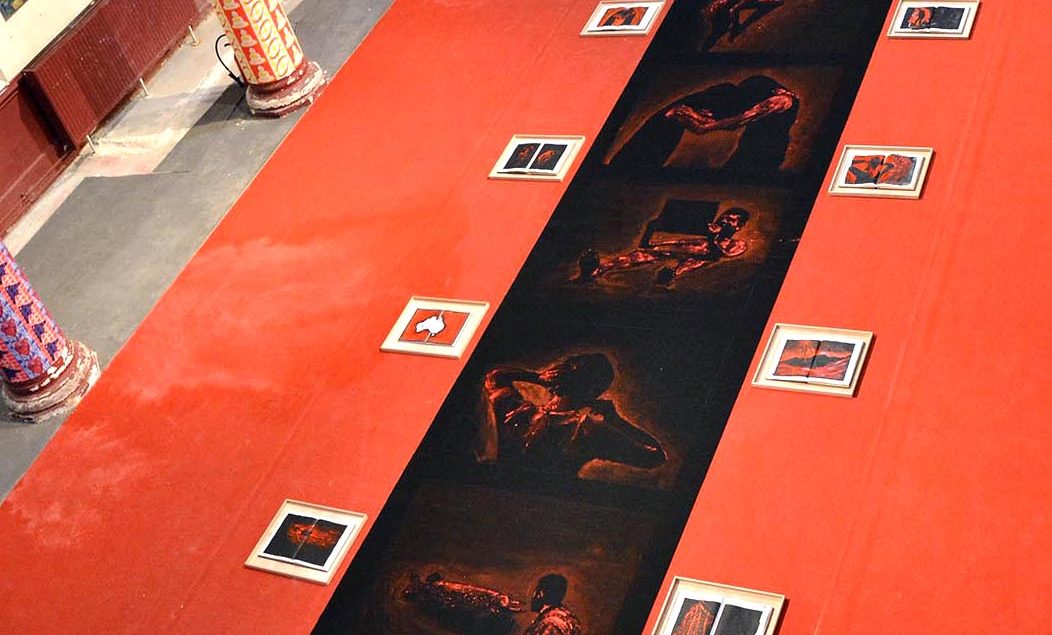 The project itself does not have the identity of an aesthetically finished work, but rather the character of an interactive set that that can be modified according to the space in which it is presented. It changes, grows and can take different forms. For the exhibition at the St Saveur Chapel in Issy les Moulineaux, the main installation follows the nave of the church taking the form of an architectural plan of a church or a basilica.

Photographs taken from the artist’s reality presents the starting point and serves as a model for carpet paintings, drawings in atlases and stop motion video. One can observe that motion as a dominant factor connects the images with one another. However the visual rhythm of sequences does not follow a particular narrative logic.

The red color on the black background is omnipresent. Like classic photos created in dimmed red laboratory light with the aid of the solvent, the forms on Pavlovic’s pictures emerge from darkness at the moment we are watching them. This red light gives to these scenes an unusual and surreal character as if we were witnessing the events of a parallel world.

In the redesigned atlases, the continent of Australia is filled with constellations of stars. Named “Astralia”, this imaginary continent, with its conceptual play of meaning, serves as an indicator for this other place of a parallel reality.

All works indicate the very moment when matter arises from nothingness. It’s obvious that the black “void” of the background plays such an important role as pictorial red matter.

Through these images the artist shows us the non-dualist thinking of the world, in which emptiness and matter form a whole.

By transforming scenes from everyday life into unusual and dramatic events in an expressive and poetic way, the Another Country project could be placed on the very edge between reality and fiction.