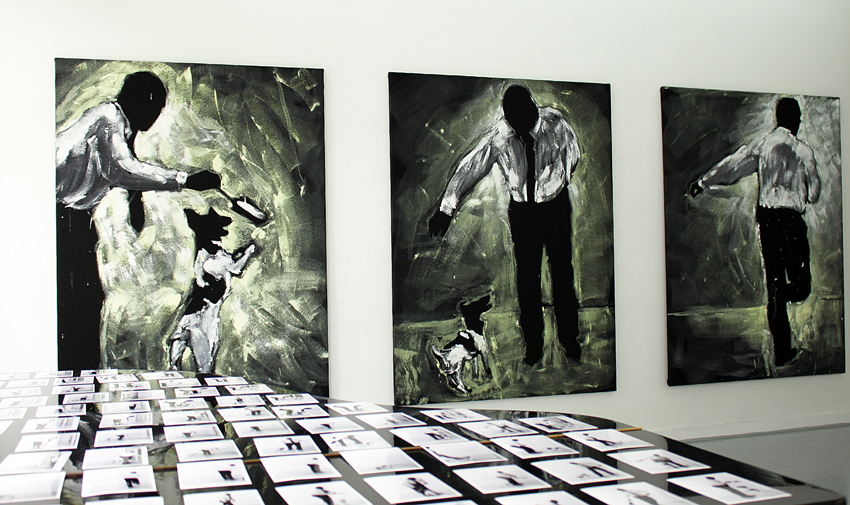 Multimedia project PLAYTIME by artist Bogdan Pavlović is going to be shown at the O3one gallery from 4th until 9th April 2012.

Minimalist, black and white graphic shows that Pavlović is suggesting are situated on the very edge between the documentary and the artistic. Photographic dissections of events are formally related to Maybridge’s anatomical photo-studies of people in motion while conceptually they are close to Joseph Boyce’s or Yves Klein’s approach, based on constant interactions between the social and the aesthetics.

The topics which the artist was working on are: custodian of one of the most influential galleries of contemporary art– (The Gagosian Gallery) playing with the dog belonging to the British painter Elisabeth Peyton while her exhibition was being put up, a haircut session during which the artist was photographing himself, and an opening of the exhibition by famous Japanese designer Tokujin Yoshioka are all a pretext for the new, visual “reading” of what we consider to be an “everyday life”.

Such a position is supported by altering the art space into a hair salon. The reality, in a funny way which also defines the movie of the same name -PLAYTIME by the French director Jacques Tati, conquers the gallery.

Liberated from the complex of being too serious and the narrative which burdens a great deal of contemporary art, this project by Bogdan Pavlović offers a specific type of intellectual and visual sparkle whereby art as well as reality, are perceived as just one great play.