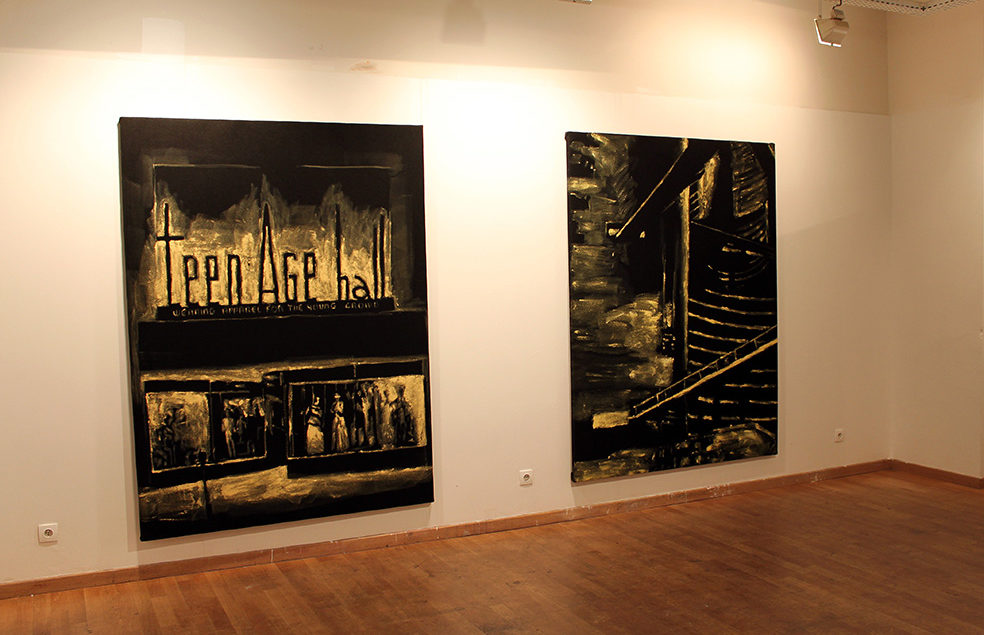 The reality of the world is infinite.

As such, the work of Bogdan Pavlovic does not cease to interrogate, to provoke, and to illuminate all of the existing realities. In search of a very personal form of representation, Pavlovic’s work obliges the spectator to apprehend the canvas through a wide horizon of expectation.  For his mastery of the different pictorial techniques is only comparable to the keen sense of an always unerring palette,  and to the plurality of the subjects that he treats. Initially, it is a photographic image that inspires Pavlovic. Photographs illustrating a moment in History or a just a brief moment are the base upon which the artist goes on to render all of his reflection.

The painting, then, no longer serves to directly show the visible, but seeks rather to interrogate the real and its images. In an attempt to fulfill this function, Pavlovic explores the photograph upon which it is based. It is a whole investigation of the image that the artist proposes in reflecting upon the being, upon what the object is in and of itself, upon its social value, upon History, the instant, the gesture, suspended time. He casts doubt upon the natural vision and thus questions our view of the world. In what ways is the view of the painter different from that of the photographer? What truth can one hope to access in a world made of social and political realities?

Photography is the form par excellence of the attestation of the real; it proves the very existence of the referent. And yet, where photography questions the real and its singular character, painting seeks to transcend this same subject. The artists paints from the photograph, and therefore from what was unique but has become plural, from what was in a single space but has come to be in many. And Pavlovic takes the opposite stance in giving all of the “aura” back to the original photographic instant, making each image a unique apparition in a unique time.

Once we get beyond the principle of mimesis (imitation that achieves reality, according to Aristotle, Poetics.) , we are offered the full invention of the artist’s gaze. We are multiple and Pavlovic’s gaze offers an image of the being in reducing this multiplicity to one vision. One vision, but above all one point of view. For the composition is a fully-fledged actor here. It is another way of presenting the same moment fixed at its origin by the camera’s objective, and re-transcribed through the eye of the artist—the gesture of the painter. The act of removing, of cropping, can create meaning (Reader, Kids). It is therefore about suggesting the whole from a part and about emphasizing what is outside the field of view; that which we cannot see, but which is materially linked to what we can see (Awakening). As for the close-up, it transforms reality and reveals it (China Girl). Likewise, an exalted detail becomes of value in itself, while in reality it might not have been so valuable (Girl). Even despite the proximity with the subject, the human identity does not exist. There is only the image of this identity—an image that calls to us through an excess of presence. This sometimes excessive zoom renders any image sensational (Building). Pavlovic thus exploits the object through unexpected and sometimes almost unidentifiable angles. In Interior and Courtyard the eye hesitates, loses itself, seeks an anchor to define the form, to understand… Then, as one grows accustomed to darkness, the gaze finds markers to better discover this other real. The nature that speaks to the objective is different than that which speaks to the plastic effects of painting. Here the form and the content are in dialogue to transcend appearances. The architectural details, thus enlarged in such an isolated reality, are decontextualized from the exterior world. Hence, an effect of slowing down, like a temporal magnifying glass that enlarges time, indicates the place and sets the scene in order to reveal the part of the real world that we did not see until then.

But this is without counting on the notion of History and its influence on our common reality. For these images are above all chosen memories that appeal to a collective referent, and are therefore easily identifiable (Bauhaus, Rex Theater). They are as much traces of a compressed memory in the form of images. The question to be raised, then, no longer concerns simply the relationship between a spectator facing himself, the group, and the world that surrounds him, but that of a community facing a common heritage. We are all equipped with a memory of images – visual totems that construct our common history. By the quasi-ritual reproduction of the reality fixed by the photographic medium, Pavlovic provokes fissures by opposing, on one side, the traces of memory that are imposed upon us, and on the other, the veritable perception of the world and the reality that surrounds us. A close relationship exists between the individual and his memory. For it is memory that leads each of us towards history. We maintain ourselves through time, and if the photographic image fixes this time until infinity, then painting sublimates it. Pavlovic comes face to face with this overflow of history. He explores memory through historical subjects or direct referents to images present in the collective cultural subconscious (“Shaman” or Pavlovic’s wink at Joseph Beuys enveloped in his thick felt coat- Joseph Beuys, Coyote : I like America and America Likes Me, New York, 1974). In thus making reference to collective images, by this game of visual reminders, the artist leaves a large part of the interpretation free to the spectator in order to link what he imagines to what he sees. This is also a way of highlighting the universal images that tend to construct an individual mythology by the simple awareness of the things what we see and of ourselves. Under the framework of history, Pavlovic discovers the essence of creation. He shows that History, like an ordinary instant, is made of everything. So, the dimension of authenticity that he inspires offers to the spectator the very appropriateness of the action.

Using powerful visual means (subject, framing), Pavlovic’s work is inscribed in a profound esthetic will. Its originality resides in his choice of surface structure and a reflection on the medium of paint. For Pavlovic must live up to the demands of a simple esthetic language that refers directly to the surface and its constraints. The artist paints upon an unconventional material: carpet. A work that plunges us into the technical exigencies and constraints inherent in this surface. In effect, the technical handicap can become a stroke of esthetic luck, because on such a surface one cannot commit any error. There can be only one gesture, the brush has only one chance: it’s a “one shot.” The limits of his painting are those that the artist succeeds in making of it. Thus, Pavlovic turns what would be a bother for creation into the very sustenance of his creative act. He works on the effects of material, texture, and light in order to capture the essence of the image, more real and intelligible that the thing itself (Drowning by Numbers, European Female, Airport). The surface creates the drawing as much as the painter’s gesture; it is by turns painted or left free, but in any case it expresses itself fully and makes the composition dynamic (Kids, Interior). Pavlovic’s technical perfection resides in this capacity to take a material and work on its flaws. The painter juggles with the surface, proving his virtuosity. He invents the visible where he leaves a void, he fills in the silence of the composition with words (Art Basel, Teenage Hall). His painting is fixed, silent. His illustrative titles, linked as they are to the image, resonate like a legend, and open the work of the artist towards a total oeuvre—another example of the relationship between text and image.

To speak of the interior exile of an artist is to speak of his own territory, of the only place outside of all places where creation is possible. It is an effective alternative faced with the existing reality. Pavlovic’s painting goes further in its search for the timeless. The artist juxtaposes strata of images of varied collective cultural horizons that he directs through simple compositions and with a rare poetry of precision. He not only aims to incite selfless emotions from the spectator, but also to submit him or her to references directly linked to an experience that takes after the collective memory (History) or society (an instant of life).  In mixing history and culture Pavlovic integrates image, sign and writing in order to push the confusion between art and life to the extreme.